Cultural history of the region

Riisa was a settlement as early as the Stone Age, with the earliest written records of its existence dating to 1599. The village was in its prime during the period before World War II, when people were involved in dairy farming and sales of dairy products. The village had a dairy, a primary school, an amateur acting group and a string band, and various associations were active. Today, the Riisa hydrometric station of the Estonian Weather Service is on the Halliste River, which flows through the village. The station started operating in 1929.
Sandra lines the banks of the Lemmjõgi and Raudna rivers and is the largest village in Estonia in terms of its surface area (173 km2). Its school, which was established in the first half of the 18th century on the largest farm in the village, was also run for a time after World War II. The village boasted the Oksa or Särgoja Inn, built by the owner of Lahmuse Manor in the mid-19th century. The inn was open only in the winter season.
All that survives to this day of the impressive building (which stood 13 metres wide and 36 metres long) with its hip roof is a mantle chimney 6 . The inn was closed due to the opening of the Viljandi railway line and vodka monopoly laws.
Tipu is the youngest of Soomaa’s villages. Its predecessor was Halliste, by the river of the same name. Although the first written records date to 1811, it can be said that itdevelopment started moving at full speed in the 1860s when the owner of Kõpu Manor built a sawmill here as a part of his attempts at forest management. The Kõpu-Tipu road intersecting the village was commissioned by Alexander von Stryk, the owner of Suure- Kõpu Manor, in the 1860s. Tipu is also the location of the only subterranean cemetery in Soomaa, originating from the 2nd millennium BC. Panoramic views of the village landscape and Läti flood meadow by the Halliste River open up from an observation tower in the Läti campfire site.
Tipu schoolhouse was built in 1932 where a sawmill had once stood. At its peak it provided education to between 40 and 50 children. The school was closed in 1964 due to a lack of students. After this the building was used as a community centre and library until 1968, when the university of Tartu converted it into a base for practical training. Since 2009 the former schoolhouse has been used by Tipu Nature School, an NPO providing nature education instead of traditional schooling.
The earliest written records of the former village of Tõramaa (the current villages of Riisa, Sandra and Tipu) are from 1839. The villages of Tõramaa in Pärnu County and Kõpu-Tõramaa in Viljandi County were considered to be separate, with the former being abandoned in 1979 and the latter in 1996. The only structures that have survived are a building on Pärna Farm, an old cellar on Abaja Farm and the ruins of an old threshing-floor dwelling in Üleoja. Today, Soomaa Visitor Centre of the State Forest Management Centre (RMK) stands on what was once the territory of Kõrtsi-Tõramaa, although in administrative terms it is located in the village of Tipu.
The former village of Toonoja (currently part of Karjasoo) is situated in the middle of Kuresoo bog. It was established in the early 19th century. At that time it included six highly viable farmsteads. The last resident left Toonoja in 1987. Currently only a couple of farmstead ruins, a root cellar and a farm building in Mardi are all that is left of the once thriving village. 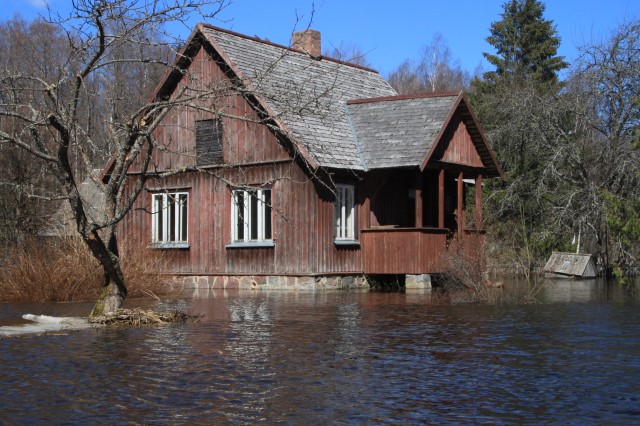