Luitemaa has a disjunct coast, there are many small bays, inlets, capes and islets. The southernmost islands of mainland Estonia are located in the coastal sea (e.g. the islet of Häädemeeste Kivilaid). Due to the agglomeration of marine sediment, the sea is very shallow, deeper areas alternate with the sand banks that run along the shoreline. The low water level reveals the sandy and muddy areas covered with boulders. Large habitats of the common reed, rush, sedge and sea clubrush stretch out on the coast. The coastal sea here offers favourable eating and stopping spots for many water birds. The most numerous and important of them are the tundra and whooper swan, Eurasian wigeon, mallard, common goldeneye, smew, bar-tailed godwit, wood sandpiper and white-tailed eagle.

One of the greatest values of the nature reserve is its coastal meadows. Formerly, pastures covered an area of about 1,000 ha. The area got overgrown with the common reed due to the decrease or cease of herding. Most of the coastal meadows have been restored by now with the help of benefits and international projects. The area of meadows maintained in Luitemaa is 600 ha, making it the largest maintainable area in Pärnu County and one of the largest in Estonia.

The flora of the low-grassed coastal meadows of Luitemaa is more luscious and poorer in species than the flora of the coastal meadows in Western Estonia because the soil is wet and decalcified. More than 250 plant species grow on the coastal meadows of Luitemaa. One of the largest habitats of the Turkish marsh gladiolus in Europe is close to the village of Häädemeeste. From the protected species, also the meadow-rue, Baltic marsh orchid, early marsh-orchid, heath spotted orchid, lesser butterfly-orchid and marsh angelica grow here. More than 15,000 barnacle geese and 3,000 greater white-fronted and bean geese stop here during their migration. Clear coastal meadows are a habitat for many protected bird species, e.g. the southern dunlin, ruff, black-tailed godwit and common redshank.

The most common and endangered amphibian of the coastal meadows is the natterjack toad.

The coastal dunes of Southwestern Estonia divide into two separate parts close to the Tahkuranna village: Rannametsa dunes on the seaward side mark the shoreline from the period of the Litoriina Sea dating back 5,000 years and Soometsa dunes that are more inland mark the shoreline of Lake Antsülusjärv dating back 9,500 years. The ridges merge again close to the Häädemeeste village. There is an extensive bog massif between the two ridges: the Tolkuse and the Maarjapeakse Bog.

Rannametsa dunes were chosen as one of the natural symbols of Pärnu County and the highest dunes in Estonia, Tõotusemägi Hill (29 m) and Tornimägi/Sõjamägi Hill (34 m), are located here. Rannametsa-Tolkuse Nature and Study Trail that is much appreciated by hikers runs along the dunes. In order to offer the visitors a chance to observe the surroundings and enjoy the beautiful scenery, an observation tower was built on Tornimägi Hill.

Streams and rivers pass the dune ridges. On the banks of the Timmkanal canal that got its name after Thimm, a former tenant of Häädemeeste manor, the sandstone bed from Middle Devonian times is exposed. Thimm initiated the digging of the canal by hand in 1856 in order to drain the surrounding areas and raft wood. His canal is known to be a spawning ground for the brown trout and European river lamprey and the common kingfisher nests in the sandbanks of the canal.

The dunes are mostly covered with forests, in some places, there are sandy areas with open soil and treeless heaths. The dunes are a habitat for the sand lizard, woodlark, wood grouse, black woodpecker, Eurasian eagle-owl, white-tailed eagle, European nightjar and many other protected species. The largest grey heron colony in Estonia is residing close to the Võiste village. 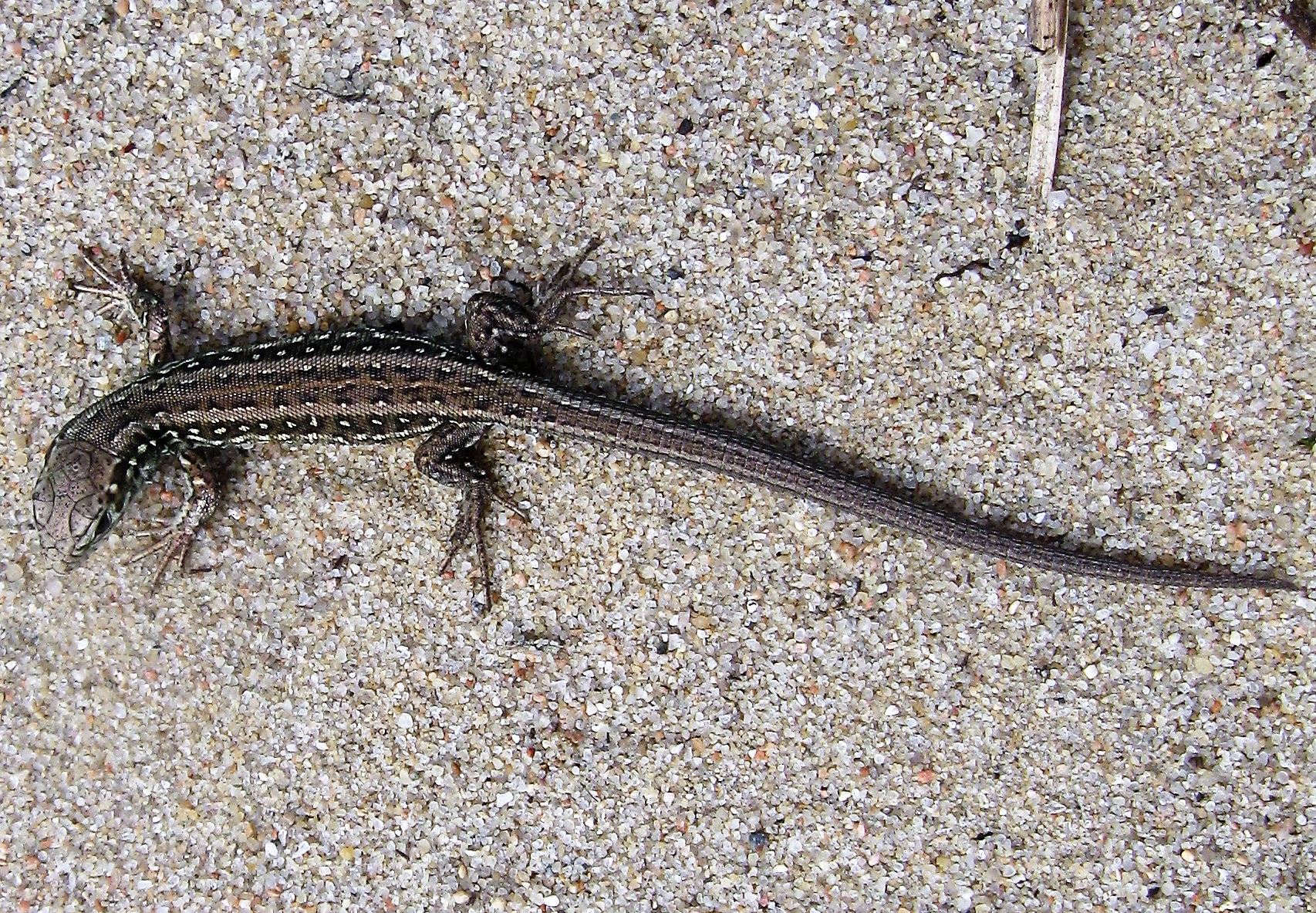 There are two bogs in the Luitemaa Nature Reserve: the Tolkuse (5,500 ha) and the Soometsa/Maarjapeakse Bog (1,600 ha).

The Tolkuse Bog is situated in a basin between the dunes and it passes the Timmkanal canal. There used to be a gulf between Lake Antsülusjärv and dunes of the Litoriina Sea instead of the current bog. The bay turned into a coastal lake when the ground rose and eventually got overgrown. The bog is approximately 8,000 years old and the thickness of the peat layer here is about 5 metres.

There is a very distinguished water regime in this bog. Confined groundwater opens up in the bog pools and as springs in bog lakes in the middle of the bog, causing conditions inherent to fens. This is why species characteristic to fens, for example the bulrush, water hemlock and buckbean, grow in the bog lakes. Ferns, sedges, dwarf birches, willows and even spruces grow in the centre of the bog. The periphery of the bog that is usually a nutritious fen is poor in nutrients here. This oligotrophic bog type is one of its kind in the Baltic countries. The peat layer grows very quickly here due to the specific water regime – the record-shattering annual growth of the peat layer (1.6–1.9 mm) in Estonia has been measured in the Tolkuse Bog. 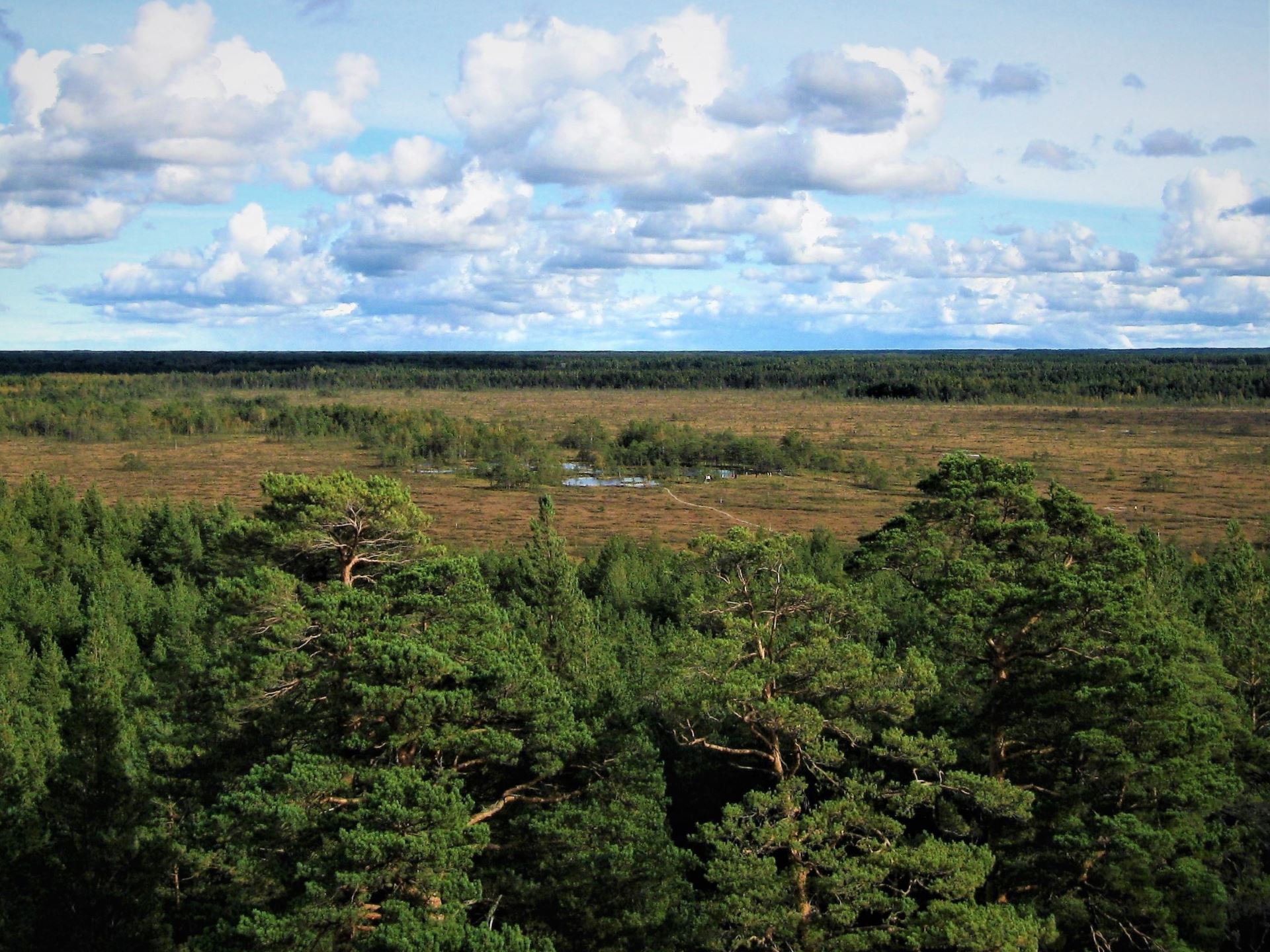 View of the Tolkuse Bog. Photo by Merike Palginõmm

Many of the big bog lakes in the centre of the bog have dried up or overgrown due to the drainage works, trees have started to grow in the open bogs. In 2001–2005, the first attempts to rehabilitate bogs in Estonia with modern methods were made in the southern part of the Tolkuse Bog.

Several forest types can be found in the reserve. The more extensive forest areas occur in the northeastern and eastern parts of the reserve. Several types of deciduous and mixed forests that frequently grow in wet habitats are represented here. Coastal pine groves, bog birch stands and wet peatland forests grow in the periphery of the bog, but luscious deciduous forests grow on fertile soil. The belt of trees is made up of broad-leaved species: linden, European white elm, maple and ash. The perennial honesty grows in the deciduous forest near the Soometsa village, which is the only known habitat beyond the limestone cliff of Northern Estonia. There are forests in the flat valleys on the banks of the Ura River that are occasionally flooded. These luscious broad-leaved forests are special because oak trees grow here. Meso-eutrophic forests occur in areas with moderate humidity, dune pine groves grow on sandy and dry dunes.