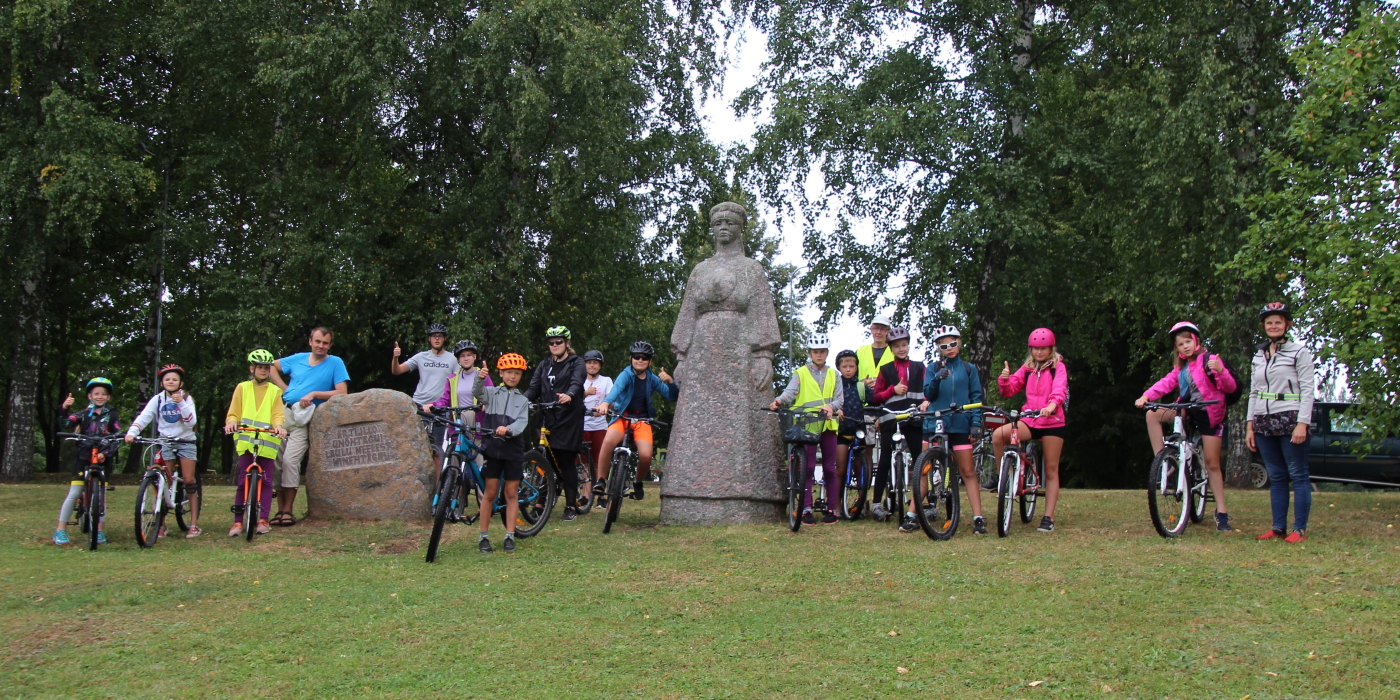 On August 23–25, 2022, 17 young people participated in the summer course of Otepää's Junior Ranger to discover the nature of Võru County on bicycles and participate in nature conservation activities.
The course started with packing bicycles at the Otepää Nature Centre. We accommodated 12 in the bus trailer and 9 in teacher Peter's car!
The first day's bike ride took us to the southeast corner of Estonia. We saw Lake Hino, which is home to black-throated loon (Gavia arctica). We saw lesser spotted eagle (Clanga pomarina). We learned that if young eagle is able to fly, he can be seen for a while around his home. And then we went to search for a nesting place — it was exciting. Everyone walked around the forest, keeping their heads alternately up and down and at the same time looking for mutes, feathers or a nest. It turned out that it wasn't that easy.
As we exited the forest, we came too close to the nest of vasps in soil. As the group passed, the patience of some wasps was finally interrupted, and three girls were able to sting. Luckily, we had Tarmo, who carried Eliise Nora to her bike and pushed her bike to the camping site.
When we got back to Pullijärve, we ate ice cream, swam, made a sauna and ate good local food.
The new morning began with the preparation of traditional oatmeal porridge on a campfire.
While riding bicycles in Vana-Vastseliina, we explored traps for bark beetles in the spruce forest. We saw up close the European spruce bark beetle (Ips typographus), their passages, and the protective reaction of the trees to the insect’s attack.
With almost 30 degrees of heat, Nopri farm was a good place to stay. In a pleasantly cool barn, you could stroke the cows, give them a silo and watch the robot milking go. In the peasant shop, there was a sign with the inscription "The store is open when the store is open".
At the old Vasteliina castle, we made our own hamburgers for lunch. We walked in the castle and in the primaeval valley of the Piusa River. We listened to Tarmo’s and teacher Peter's explanations about the formation of sandstone deposits, the biota of the Piusa River and Vastseliina castle.
While driving to Obinitsa, we stopped at the Meremäe Tower to rest and look around.
In Obinitsa we had dinner in the yard of the traditional setu farm. Then we swam in Lake Obinitsa, and in the evening those interested could play basketball, volleyball and table tennis. We stayed in the village centre of Obinitsa, where there are excellent opportunities for ball games.
The last day greeted us with rain. The morning mission was to find a way to brew tea water. We were helped out of trouble by a local kindergarten, renting a kettle.
The ride to Piusa was a cool long descent.
In the Piusa-Võmmorski protection area, we maintained the butterfly habitat along the railway. The smaller ones harvested the dried-up fallen branches, and the bigger ones removed small trees and shrubs from the area.
At the Piusa Visitor Center, we watched a movie about bats and visited Piusa caves.
Returning to Otepää, Lenna Jete asked if it would be possible to explore nature by bike next year. His father, who came after him, suggested that he sign up immediately.

The summer course of junior rangers was supervised by Margit Turb, Tarmo Evestus, Pille and Peeter Kangur. Next time, the junior rangers of Otepää will meet at the autumn seminar.

On behalf of supervisors Pille Kangur and Margit Turb